Women hate it when guys do these 10 creepy things 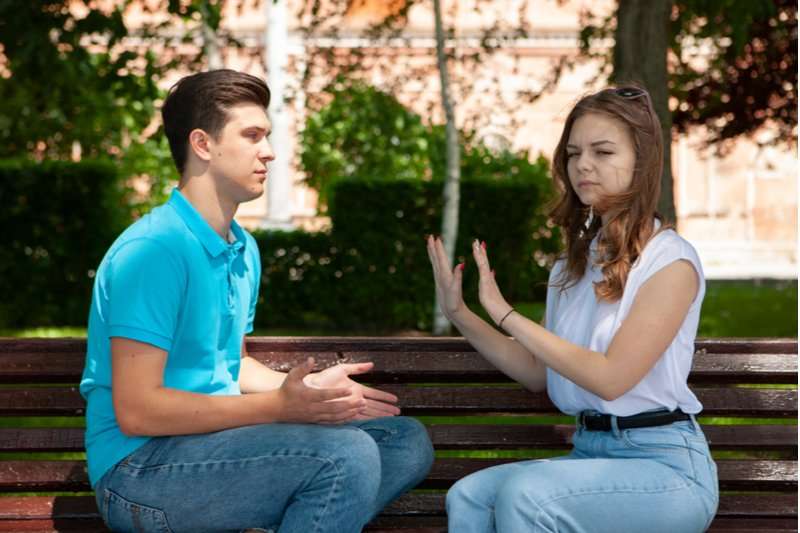 As a sex coach for men, I know that the average guy is a good guy. Most men come to me for sex coaching because they want to become a great lover to women.

But if you’re engaging in any of the behaviors I am about to discuss, you might be ruining your chances with women before they even get a chance to know you.

After reading this, hopefully you’ll feel more confident about hitting on women, because you know for sure you’re not engaging in any of these 10 creepy behaviors that turn women off.

What, exactly, is creepy behavior?

Well, according to a couple of researchers out at Knox College, being creeped out is the result of an inbuilt threat detector. This “threat detector” lets women know when something is off by giving us feelings of confusion, unpleasantness, or just plain chills.

(And women also, by the way, can be creepy, but according to their research, about 95.3% of participants stated that men were more likely to be creepy than women.)

So men, the odds are already stacked against you, but this is actually a good thing. Why? Because these creepy behaviors let women know who they absolutely do not want to sleep with, which creates space for you to consensually, non-creepily, get into their pants.

Why Does Creepiness Matter?

Women are more vulnerable than men. We’re constantly sizing up who — out of the male population — has the potential to hurt us or prove hazardous to our physical safety.

This is why creepiness is such an important factor: if you’re creepy, she won’t let you near her (much less her bedroom).

Even though most guys are not inherently creepy, being creepy sends up red flags. But there’s another side to consider as well: some men go so far to avoid being creepy that they hold themselves back. Perhaps they won’t let a woman know when they’re interested or available. That’s why its essential to know what’s ACTUALLY creepy, so you don’t chase women away or miss your opportunity.

10 Creepy Behaviors Women Hate the Most

Women tend to not have a whole lot of information when we first meet a man. We have to use the data we’re given to decide if we want to take things further. And typically, we use this data — and decide if we want to be with a man — within a matter of seconds or minutes.

Women say no in a lot of different ways. We physically distance ourselves from someone. We stop responding to messages or conversations. We don’t give direct answers, or we won’t advance the conversation by continuing to ask questions, or maybe we’ll try to exit a conversation entirely by saying, “Thanks, good night, got to go, I have a boyfriend, see you later,” et cetera.

2. Focusing on our bodies

Treat us like people, not objects. Commenting, complimenting or criticizing our bodies lets us know that you don’t see us as people but you see us meat suits. This is a huge turnoff.

Not all consent is verbal. Sometimes a woman is approaching you with open arms and giving her a hug is exactly what she’s asking for with her body language.

But if she’s not — in any way — asking to be touched, don’t push the envelope without consent.

The same is also true for kissing. If you’re not sure if she wants to kiss you or not just ask, “Hey, do you want to kiss me? Hey, would it be all right if I kissed you?” It’s not rocket science and it doesn’t ruin the mood. In fact, I believe that it creates a very, very, very attractive mood … and feelings of safety.

The best way to gauge if you are making enough eye contact is to match the amount of eye contact that the person who you’re talking to is offering.

If you’re speaking to someone who gives you a lot of eye contact, great. Meet her there without staring intensely. It’s appropriate for you to look away every so often, but if her eyes are darting all over the room and she’s not good at making eye contact herself, it’s okay for you to break a little bit less eye contact with her to match her level of comfort.

When you’re connecting with a woman, remember that you’re connecting with a fellow human being, and even if you find out later that she is married or engaged, or she has a boyfriend, you’re still getting an opportunity to connect with another human being. If she’s already spoken for, you get to practice your flirting skills, no harm, no foul — anything that happened up until you learned about that is fair game.

So go out there and practice flirting and connecting and don’t ask those invasive questions too soon.

If you’re a newbie when it comes to picking up women, sometimes having a “line” can help. My favorite: “Hey, do you know where the nearest coffee shop is?” It can start a conversation and doesn’t feel stale!

But if you’ve ever seen someone tell the joke, “Hey, did it hurt when you fell from heaven?” Those lines don’t work. They’re inauthentic.

I would way, way, way rather that you go up to a woman and say, “Hey, I feel kind of nervous telling you this, but I think you’re really attractive and I wanted to know if I could buy you a drink.” That line is authentic. It’s vulnerable. Lets me know the truth about you. And it lets me know that he was kind of nervous asking that question. If I’m vibing with you, I will let you know. And you being nervous is not going to be a deal-breaker for me. In fact, it might let me know that you’re going to tell me the truth about other things and that you’re an honest person in general.

If this feels too vulnerable for you, try something like, “Hey, I couldn’t help but notice your very cool earrings.”

Choosing something that is not directly related to the stuff that she was born with, i.e., beautiful eyes, great hair, wonderful skin. These things are nice, but we didn’t choose them. Complimenting us something we chose gives us an opportunity to talk. I can tell you the story of where they came from.

7. Flirting or hitting on somebody who can’t escape the situation.

If she can’t escape your Lyft car, if she’s the barista at the coffee shop or the cute new pharmacist at the pharmacy…. then she is in a service position where she can’t really be rude to you. They’ll feel weird saying no because they’re in an unequal power position to you and they can’t really leave.

You can come into the coffee shop and creep on her every single day and ask her out every single day. What is she supposed to do? Quit her job? It’s just not fair. It’s poor ethics. Please do not do it.

The only situation in which it is okay ever to connect with one of these professionals in this environment is if you will never see them again. And I highly recommend all you do is write your number on a piece of paper and say, “Hey, I’d love to take you out some time. Here’s how to get in touch with me.” And then leave, walk away and never ever visit that Starbucks again. And if she wants to get in touch with you, she will.

8. Getting sexual too quickly.

This has actually been researched as one of the creepiest traits in a man. Sending unsolicited dick pics, getting into an online dating chat where you just move the conversation to sex way, way, way, way, way too soon. A lot of guys do this. I think it’s something about the impersonality of doing a dating app, but if you wouldn’t say it to a woman who’s sitting in front of you at a restaurant, don’t say it to her over text message. And hopefully, you would never just whip out your dick and show it to her at a restaurant either.

9. Restricting her movement in any way.

This one is critically important.

Do not prevent her from leaving a space. Do not use your size and strength to block us or prevent us from moving.

It’s one of the all-time creepiest things a man can do: is to prevent a woman from having complete body autonomy.

If you get closer to a woman and she steps back, do NOT then step even closer.

If you notice that as you are getting closer to her, she keeps getting further back, for God’s sake, stop approaching.

A Little Bit of Awareness and Empathy Go a Long Way.

One of the biggest things I hope you take from this is simply: pay attention to what you’re doing and to how it impacts others. This extra little bit of awareness is worthwhile because it will not just benefit you in hitting on women or benefit you in being in a relationship with a woman. It will benefit you in every aspect of your life.