Could This Be You? Sexual Orientations You Didn’t Know Existed 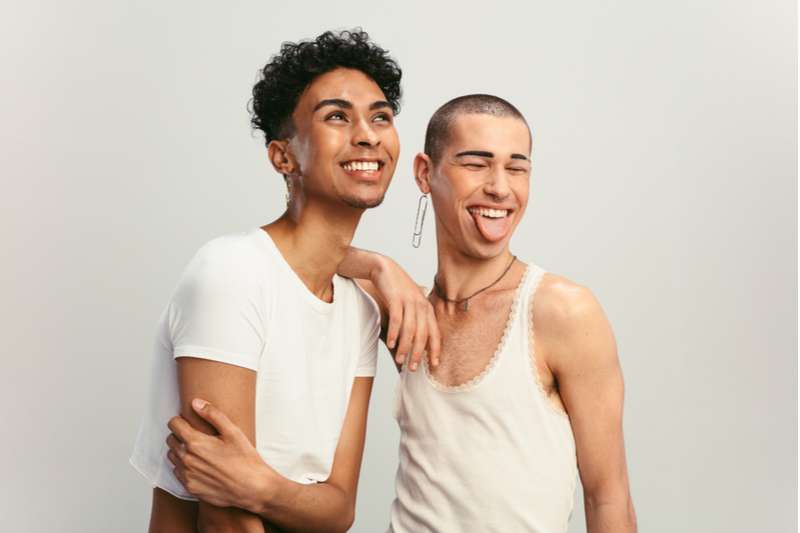 You’re probably familiar with the array of sexual orientations that comprise LGBTQ+.

But even if you’re IN the LGBTQIA+ spectrum, you still might not know about the other, lesser-known sexual orientations out there.

We like to think of sexual orientation like the Sorting Hat from Harry Potter. When we reach the hallowed age of adolescence, we put on the sorting hat, and it declares, “You are straight!” or “You are gay!” or “You, my unkempt artist friend with black nail polish, are bicurious!”

So, even for those of us who grew up in really progressive households that embraced other sexual orientations like being lesbian or gay or bi, we STILL, many of us, have this idea that you are EITHER gay, OR straight, OR bi, OR trans, … but that’s about it.

In this article, I’m talking about the NUMEROUS sexual orientations out there that you may have never heard of, BUT might answer some questions you have about yourself.

In fact, maybe your sexual orientation is one you’ve literally never heard of before.

So throw out everything you’ve ever heard, because whatever sexual orientation you THOUGHT you were … just put it on ice. Okay?

Now, I grew up in a pretty normal, midwest conservative-ish family, and the option to BE anything other than straight was never really on the table.

But with age, and a little bit of perspective, comes curiosity, maturity, and heightened self-awareness. Maybe you start noticing that you can be attracted to anyone — regardless of their gender or sexual orientation.

Maybe you find yourself sexually and romantically attracted to ice fishermen in Wisconsin for four running relationships in a row now. And maybe you have questions.

Maybe you always thought you were straight, but you find yourself attracted to someone of the same gender because you like the way their voice sounds, you like how they carry themselves, or they’re really damn good at playing the ukelele.

And then you start wondering, “What does this mean about my sexuality? Does this mean I need to buy my wife a ukelele?”

But hey before you do, let’s break this down.

Does it even matter?

Why should we even talk about sexual orientations? Aren’t we oversexualizing everything as a culture already?

Do we have to put a label on everything?

Look — it’s fair to not want to put a label on sexuality.

In fact, I encourage you to just open your mind and drop all labels and just “be”. There’s something powerful and beautiful to that… when you don’t have to worry about what category you fall into. You just love who you love! And you bone who you bone!

It is freeing to open your mind to alternate sexualities that might perfectly describe you!

Here’s why I believe it’s important to talk about these lesser-known sexual orientations:

Learn more about yourself by diving into who you are as a sexual being. There is absolutely no shame in breaking out of the box.

Maybe you’ll identify with one or a couple of the sexual orientations I’m about to list through today — and that’s totally awesome. It’s FUN and really cool knowing they’re out there.. It’s fun knowing you can recognize these sexual orientations in yourself and in your friends and loved ones and partners without any judgment.

Sexual Orientation Is Not Fixed Throughout Your Life.

Many of us think that whatever the sorting hat says: that we’re gay or straight, is true for our whole lives.

This is not true. Our sexual orientation is flexible. It can change. And often does.

Now, let’s say you’ve identified as straight your whole life. And now you’re in your mid-forties, and you’ve realized that you’ve started to experience attraction for a wider gulf of various people of various genders. Talk about confusing, right? You thought you were straight, and you might wonder: “has this been a repressed part of me my whole life? Have I just been stuffing this down in my soul my WHOLE LIFE?”

In her book “Sexual Fluidity”, psychology professor Lisa M. Diamond chronicled her research on 80 non-heterosexual women over a period of 10 years.

During that time, she discovered that a significant number of these women reported changing their sexual orientation.

Now, why did so many women change their sexual orientation?

They fell in love with a member of the opposite sex!

Lesser-Known Sexual Orientations You May Have Never Heard Of

So without further ado, let me introduce you to some of the lesser known sexual orientations that you may have never heard of.

So if you don’t really care about having sex with others, if you find yourself not being attracted to anyone in that way… ever… you might be asexual.

Aromantic people might have a place for sex in their lives, and they might experience sexual attraction toward others. But these people have little to no romantic attraction to go as a nice steamy side dish to sexual attraction. So, if you’re aromantic, forget the rose petals and do your thing.

Someone who can experience sexual or romantic attraction to ANYONE — regardless of their gender, sexuality, or identity.

Polysexuality, much like pansexuality, is a “create your own adventure” scenario.

This is an umbrella term — and a reclaimed word — for people who are not specifically heterosexual. So if you’re not super straight… you’re a little bit queer. Welcome. Try the rainbow frosted cookies.

The process of being curious! The adventure of exploring! No matter what your sexual orientation is … even if you live and die by being straight … I encourage you to be questioning at all times.

Questioning means that you are leaving an open mind to your own experience. You’re not shutting anything off — you’re not forcing anything.

You are sexually attracted to intelligence or talent rather than a specific gender. It means you don’t care if they’re a man or a woman… what really matters is, “can they play Chopin like a savant?” “Can they dissect political theory to make it sound like a beautiful symphony of human progress?” “Do they have the deep emotional intelligence of a Bronte novel?”

So if you’re turned on by the intellectual depth of your professor … you might be sapiosexual.

The label-rejecters! So if you’re sitting here reading this saying “why put a label on it?” than YOU might be pomosexual. Not to you know, put a LABEL on it or anything…

When you rarely feel sexually attracted to any ol’ human walking down the street. You’re not about to fall in love with a stranger on the bus.

BUT once you get to know and establish an emotional connection with someone, then yeah! That kind of turns you on!

So if you’re demisexual, you only experience sexual attraction after a close emotional bond has formed. Pen pals beware.

Graysexual does not mean you’re into people who are gray, but it DOES mean you experience sexual attraction very rarely, and with very low intensity.

There is some debate as to whether graysexuality fits under the asexuality and demisexuality umbrella. Because an asexaul person, as we discussed, experiences little to no sexual attraction.

So if you’re graysexual, or demisexual, or asexual, you might have a high libido, but sex with a partner might not be super important to you. You might experience other forms of attraction: platonic attraction, emotional attraction, romantic attraction. But you’re usually not going to jump someone’s bones. And that’s okay.

Being allosexual simply means you experience sexual attraction for others. So if you’re straight but your best friend is gay, and your brother is pansexual and your roommate is demisexual… you’re all allosexual.

How Do You Know Which Sexual Orientation You Are?

Maybe while reading some of these, you were like “that’s me! That’s it!” but otherwise, what if you are just not yet aware to that part of yourself?

And how can you know what your sexual orientation really is?

#1 Foster awareness of yourself.

Whenever you feel yourself being pulled toward somebody or attracted to somebody — no matter what your relationship status or sexual orientation is — be aware of your attraction.

Pause in that moment and recognize that you are experiencing attraction for somebody.

What if you notice that your own sexual orientation changes throughout time?

First of all, congratulations on being self aware and open-minded and knowledgeable. And two, please don’t judge yourself. This is normal. It doesn’t necessarily mean you’ve been repressing something deep inside your brain. It’s totally fine — this is healthy.