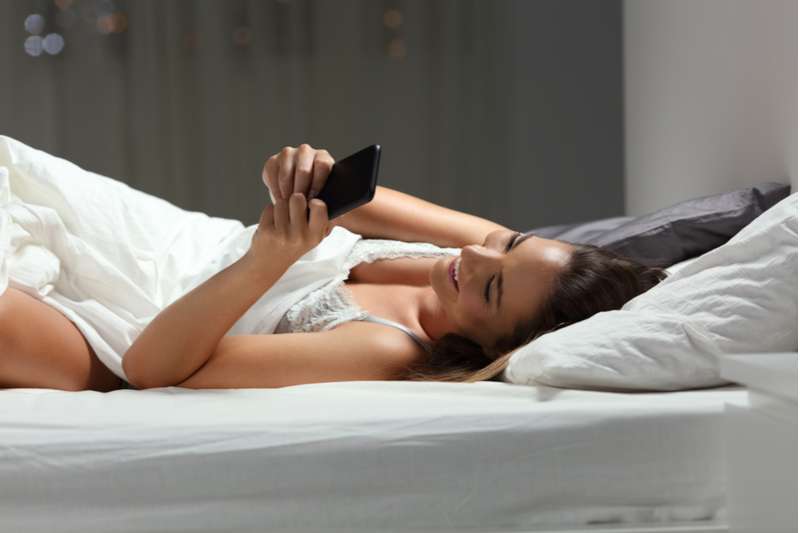 When was the last time you called a woman? Chances are, it’s been awhile.

These days, texting is the number one form of communication when it comes to the early stages of dating which is why in this article we’ll explore the 7 text messaging rules you need if you want her to want you.

1. Text Within 24 Hours of Meeting

Throw out all you’ve been told about “playing hard to get.” It’s important not to let too much time pass between texts.

With that said, you don’t want to message her within minutes of meeting, but you should send the first text within 24 hours, while the date is still fresh in her mind.

Just shoot her a message so she has your number, and let her know it was nice to meet her and make a specific invitation or request, like “Would you like to go out for dinner next Saturday?”

This communicates that you’re interested while the excitement of meeting a cute guy is still fresh in her mind.

Spelling things correctly shows that you care enough to put in a minimal amount of effort. It helps you come across as put together and grown up.

You also just end up sounding smarter and she’ll be more likely to take you seriously. Because the truth is, women don’t want to be reminded of their prepubescent years when in the early stages of dating someone new.

I think we can all agree that being 12 sucked.

Pay attention to how she texts you and try to match it. Look out for how long she takes to respond, how long her texts are in general, and how frequently she texts you.

You don’t want to be putting in way more than she is or way less. It’s totally fine to take the lead and show you’re interested. In fact, it’s a good thing!

If she’s sending you one sentence texts and you’re responding with a full paragraph? You’re probably out of sync.

But if you’re taking into account how much effort she’s putting into her texts to you, you’ll have the chance to assess how interested she is, and know when to pull back or push forward.

There is nothing more fun than having one of those great, back and forth, stare at the screen while the other person is typing text conversations with your new crush.

And there’s nothing worse than your crush vanishing into thin air right in the middle of the conversation.

If you find yourself having one of those fun back and forth, and suddenly something comes up and you have to go… just let her know!

This shows her that you respect her and her time, and that you don’t want to leave her hanging.

As much as you want to show her that you’re reliable and available to her, don’t take it too far.

I never condone playing games. They’re pointless and not the way to build a real or meaningful connection.

But  it’s also true that you shouldn’t be endlessly available to the person you’re texting, especially if you’re just getting to know them.

If you see her text and you happen to be by your phone? It’s totally fine to respond right away but if you’re constantly giving her immediate responses? It’s probably going to come off as a little desperate.

The key to this is actually living a life away from your phone which is something you should be doing anyway!

This sends the message across that your time is valuable and you have things going on in your life.

Women love when you check in on them. It’s such a nice, simple way to show her that you’re thinking of her.

If the woman you’re texting tells you about a big meeting she has on Monday? Or shares with you something she’s nervous or excited about?

Check in with her about it!

Bringing up something that she already told you about and checking in on how it went is seriously attractive.

It shows her that not only are you thinking of her, but you’re actually listening to what she’s saying, you remember it, and you care enough to follow up.

We all know how important consent is in the bedroom and bringing your consent game into texting is equally as crucial.

I don’t know a single woman who would be happy to receive an unsolicited dick pic. Seriously. Not one.

But beyond that, if you’re having a racy thought, or are thinking about sending her something that’s a little bit NSFW… you definitely want to check in with her first and make sure she’s into it.

If she gets a spicy text at the wrong time? It kills the mood before you’ve even started.

If you’re thinking about sending her a cheeky text, a simple check in first goes a long way…

Text her something like: “Hey, I’m having a thought about you and it’s a little NSFW. Mind if I share?”

She’ll appreciate it. I promise.

So there you have it! The seven texting rules to make her want you.

Now warm those thumbs up and start typing.

And if your self confidence could use a little boost, or if you just want to level up in all areas of your life and show up better and stronger every day check out my course She Comes Too. You’ll get the secrets to giving a woman ultimate, mind-blowing pleasure in the bedroom and so much more.